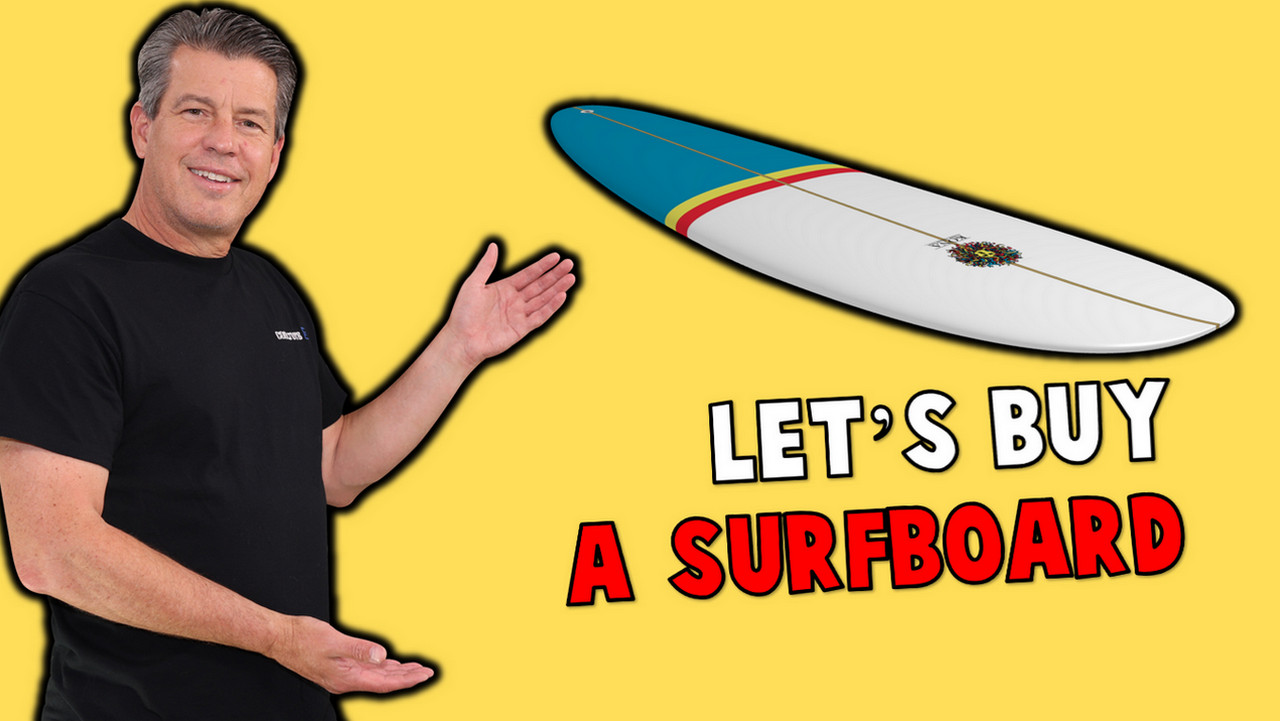 In this sixth Episode of Season four for CoolToys® host Scott talks coffee, fires and then he goes out to buys a surfboard. Don’t forget to subscribe to the YouTube Channel! With tips from ERS surfboards master shaper Mike Erspalmer, Scott figures out his next addition to the quiver. Oh yeah, buy some Swag and help us out!

Transcript of the Episode if you want to read…

Scott:
Hey guys, I’m Scott with CoolToys. And today we’ve got a great show. I hope you’ll hang around and I hope you’ve been watching the show. If you have been and you like it, please subscribe. Go to CoolToys.TV, pick up some swag, show off your CoolToys. Now, if you got something you think’s a cool toy, send it to us and we might put it on the show.

Today, three cool things we’re gonna do or talk about or whatever. I don’t know what you wanna word it, but three. We’re gonna talk about surfing. I got caught surfing a wave, recently, pretty cool picture. (Photo Credit Instagram @BolsaDave) Take a look at that and had a lot of fun. Now for those of you that watched the show, you know, that I’ve got a pretty big quiver, 13 boards.

One of them, well, we’ll talk about that in a little bit. We’re also gonna talk about fire and burning things. That’s always a lot of fun and always CoolToys have to show up in that. Right. And finally, Coffee. Now a lot of you know, that I don’t drink regular coffee. I drink cold brew after years of drinking diet Coke.

And finding good cold brew on the road, when I travel is really difficult. So Starbucks makes these little bottles, but they’re hard to find and I’m oh, geez. I’m so sorry, Starbucks. But the cups that of coffee that you sell cold brew in the store. I, I just can’t drink. ’em they’re terrible. And I don’t wanna put all the calories in, so I make my own now on the road, again, really tough to do, but somebody found this little Stanley Thermo looks like a regular Thermo, right.

But there’s a secret, pop it open… French press. So two packs of coffee from the hotel, either those crazy little cups or, just the regular coffee pack. Stuff it in there. Put in some cold water, let it soak overnight. Get up in the morning, mash the grounds to the bottom. If you had to take the grounds outta the package for whatever reason, and boom, cold brew coffee, ready to go.

So my wife thought it was completely ridiculous that I needed to take a French press on the road. So for that reason alone, it get’s cool Toys approved, but I’m gonna give it the CoolToys approved double star because I like it too. And that does make it a CoolToy. So lot of cool stuff, we can sit here and talk about it in the studio, or we can just head downstairs.

So let’s go down to the quiver.

All right, guys, before I go into the shop and play with the next toy, work on the Jeep, I want to show you something and talk surfboards. This is the Fig, the first Fig that I bought after returning to Southern California and retiring from flying jets in the air force reserves. Sadly, Rick is no longer with us.

The man we used to call the Rockin’ Fig. His son Ricky’s running the shop, but this board. In Memorial, we’re gonna turn it into a shower, make it permanent behind us. We’ll see that on a future episode, you’ve seen this in the versatraction episode. We’ve had versa traction on it the whole time, but we have liked the, hexatraction.

And now Hawaii’s wax mat that we found from Dave over there at Surfco great stuff. We’re gonna put that on our new board, but you know, the rule of the quiver, there’s never too many surfboards. There’s always room for just one more. So we’re gonna pull this one out and make room for it and get to it.

That’s enough surfer right now. We’ll get to it after, but let’s go play with toys in the Jeep and talk about fire.

One of the cool things about going to the beach here in Southern California and surfing is, well, I take the Jeep, but the other part is we get to bond, fire picnic, and have a good time out at the beach. So little fire safety. We usually have one of these four pound first alert fire extinguishers in the Jeep, but there’s a problem.

The new JLU have this square roll bar doesn’t quite fit. You. Can’t just put the round clamp on and round clamp on and have it good on the roll bar like we used to. So thanks to the folks at element. This little teeny thing has all the firefighting power of that F four pound extinguisher. That’s it. The whole thing, pull the cap twist and go.

Just like flares in the military comes with a little clip. Two screws. You can Mount it pretty much anywhere. Like I’ve got it right here. I put a second clip just to make sure it was stable for all the four-wheeling because it does go up and down and I didn’t want it popping off, but great little fire extinguisher.

This one element is gonna go in the back of the little sports car we got. And with that in mind, we’re fire safe, ready to go to the beach and picnic. So now it’s time to go surfboard shopping.

Mike Erspalmer. How you doing brother? So here, we’ve got Mike Erspalmer the shaper for ERS surfboards, the owner and Mike, Hey, good to see you brother.

Good to see you. Welcome to Aloha

Thanks man. So this fish, this board, and I don’t wanna call it a fish, cuz it’s kind of long, but it is a swallow tale and the guys I’ve watched write it are writing better than they should be.

So I’m losing waves to guys and I want to compete. I want one of these I think. So let’s talk about it a little bit first. You know, I don’t know squat about boards. I have 13 boards under the rule of just one more is enough. So of course, we’re gonna go just one more and talk about the board swallow tail.

That’s the first thing that I noticed that’s different for the length. Why the swallow tail?

Well, most of the guys I’ve been making this board for have, are coming down in size. They’re on 10 foot boards, nine, six. But they want to pack a lot of flotation into a smaller board so they can still catch waves and battle with everybody out in the water.

Little, a little extra ease for catching a wave too, because tail catches the wave.

Oh, cool. Okay. So that’s something, I didn’t know that tail catches the wave, not the nose, not the nose. Excellent. All right. So now this one is on the bottom and you said that’s a quad.

Yeah. This is a quad. I noticed that my other fishes are twin fins and this one’s a quad.

Why what’s the difference between a twin and a quad?

Well, you could run a twin, you could run a quad and pretty much any of them. These guys have been wanting the quads traditionally a twin fin fish with, with the swallow tail was a board made for a much shorter. much shorter project. So basically like a 5′ 9″, or 5′ 10″ guys were coming off their other boards, but they were wider.

So we pack a lot of flotation in that smaller board. They were kind of mush pillars. The twin fin really reacts well for slow waves. But then you can ride ’em in some good stuff, too. If you’ve got the talent, the quad fin kind of helps work a little better in higher in the face. It hangs in there higher and tighter.

And it they’re very fast, so it just gives an extra amount of motor to the board. So instead of a four cylinder, now you’ve got an eight cylinder, you know?

Oh, that, that sounds like something I can use.

Everyone can use a little bit more, right?

Yeah. Yeah. More power, always more power. Also with this board, we’re looking at some of these here are I, I call ’em resin, but I think you call it polyurethane and then some are, well, you have isn’t epoxy a resin, right?

Yeah. Epoxy’s a resin. Another form of resin. You have a poly polyester resin. Okay. But the blanks are a polyurethane. So the foam inside foam is different. So the foam we’re using on the epoxies is a EPS foam which is kind of like your cups that you’d get at a store for a drink, a cold cup, you know, the styrofoam beads is kind of what it is.

So it’s lighter. It’s lighter. And you actually get about three to five percent more buoyancy out of an epoxy. Excuse me, EPS mm-hmm versus the polyurethane.

Okay. So the foam inside foam is different. Okay. And this foam in the epoxy is EPS. Okay. And the benefit of the EPS lighter, more buoyant. Cool. Lot fun. Excellent.

So this board, I think we want to do epoxy quad a two, four something in there.

Yeah. You know, we’ve been making these kind of big float kind of chunky I can make ’em thinner as well. But a lot of the guys have just been reacting with the volume, cuz they want to have the paddle ability to catch waves quicker and out paddle some of the guys out there.

It is crowded and it’s little fun, but and it’s just given ’em the opportunity to have a board that’s actually gonna be lighter as. And do some of the maneuvers that they might not been able to pull off on their other boards. So there is a secret that this board’s gonna make me a better surfer.

There we go. Well, that’s the idea. All right. So this is the Nissan GTR of surfboards.

Okay. So it gives you quite a bit of hope, quite a bit of speed and a lot of fun, lot of fun, a lot of guys liking ’em. These are kind of the, the gentleman’s quad fish because they’re 8′ 6″. Yeah. Most young guys are not riding anything like this, you know? Yeah.

Hey, he did call me a fat guy. Had to throw it in. Well, there it is. All right, so that’s it for CoolToys® today. Come back next time. And hopefully in a few episodes, we will walk out of this shop with a brand new burst Palmer quad fin swallow tail semi long board. Thanks for watching. We’ll see you again next time.

Thank you. See you, Mike.