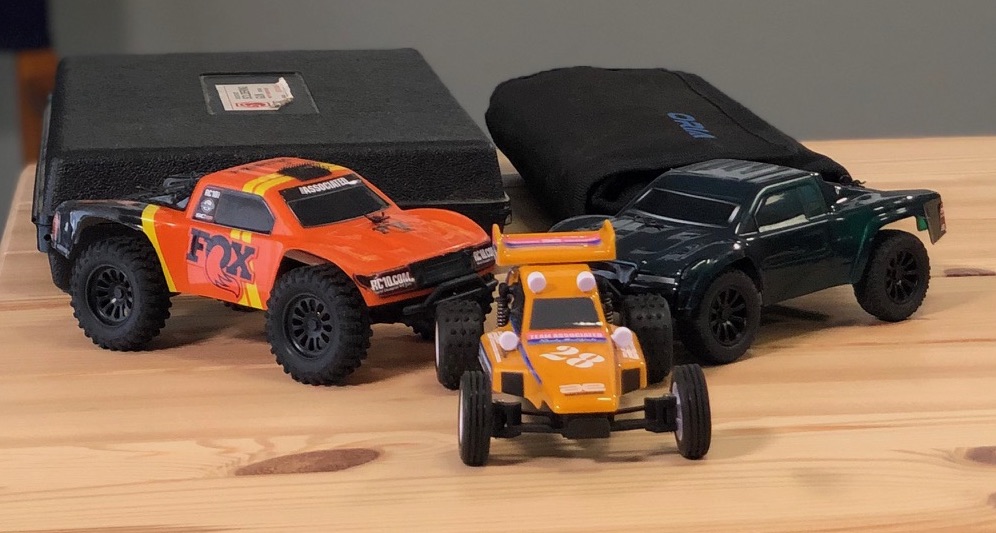 Another episode recorded live and using the Fan2Stage App.

In this episode Scott gives bumps to SHACC and tells everyone about how good a deal it is to join. SHACC is the Surfing Heritage and Cultural Center. The $100 family membership is a great deal according to Scott.

The real reason for the guys being in the studio is the battery upgrade to the Team Associated RC cars to get them ready for the FatShark RC FPV challenge. In the last episode you saw the guys get two FatShark RC Scout FPV goggles. Scott has never used them so the challenge was on.

The obvious answer for the first challenge was an FPV RC Car Race. Josh had already hacked one of his RC Cars so he could increase the battery life and double the voltage. Scott decided Josh should do that for his car so they can have an even race.

So in this video Josh and Scott discuss the dangers of doubling the voltage and increasing the battery size over 5X. You may recall in the previous RC Car video a couple of the cars literally burned up. This kind of stupidity isn’t safe, but it must be fun because they keep doing it.

The first thing about what the guys do in this video is that you lose your warranty. The minute you open up your Team Associated 1/28 series car your warranty is void. Next you will be working with a very very small motherboard and soldering on it. A regular soldering iron won’t do or your RC Car Hack will be an RC Car that is whacked.

Finally when you do an RC Car Hack and double the voltage you will damage the car. Josh explained in the earlier videos about how the el cheap RC Cars were hacked and quickly cracked or burned up. In this case the piñon spins right off the axle. The little motor can’t handle the power. Without Josh’s secret modification that is.

The End Result of the RC Car Hack

At the end of the episode the guys each have a car with a 7.4v battery replacing the stock 3.7v battery. This means new chargers and enough power to handle the addition of the FatShark RC Camera.